EMERGENCY ALERT Important Information in Regards to the Coronavirus Read on... 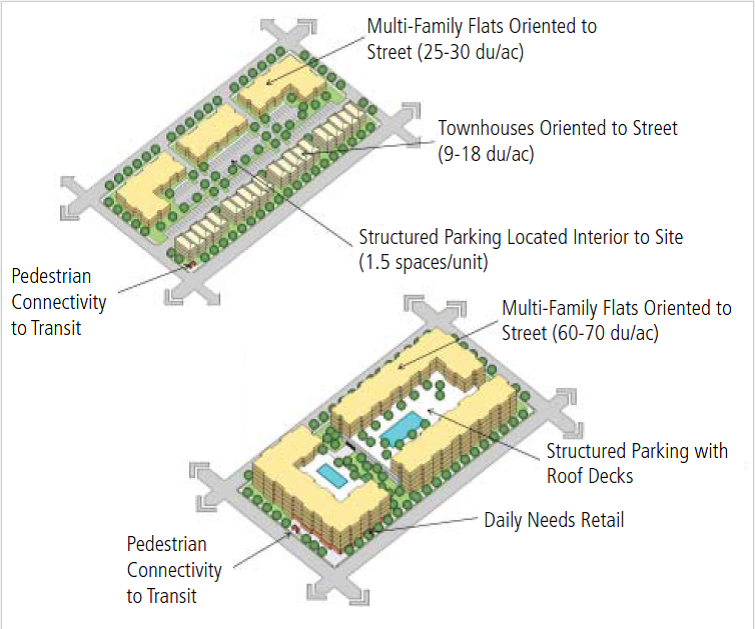 The land use framework for the Community Redevelopment Agency (CRA) includes creating new mixed-use places focused on existing centers of development in some cases and on new development in others and on major transportation nodes such as street intersections. The Framework Plan is consistent with the Activity Center provisions within the Ocoee Comprehensive Plan identifying creation of a new Mixed-Use Future Land Use Category for the CRA that recognizes the following places: Commercial Node, Mixed-use Village, and Hospital Node. Of these three, the Mixed-use Village concept has the greatest potential to create real change in the CRA’s development pattern.

Mixed-Use Village will encourage the future redevelopment of these target sites as walkable, mixed-use places in the form of compact sites with structured parking, a combination of use types on single sites, and a critical mass of employees and residents to support expanded commercial development. Mixed-use Village environments serve both large floorplate tenants and small tenant suites. These centers of activity have the potential to accommodate mixed-use retail, office, and residential building between two and five stories situated within a fine-grained network of urban streets. Integrated public open spaces should be distributed within walking distance of the residents of the neighborhood.

News
Action Request
Contact Us
News
City home
Site Tools
Back Up
Under Florida law, e-mail addresses are public records.
If you do not want your e-mail address released in response to a public records request, do not send electronic mail to this entity.
Instead, contact this office by phone or in writing.
[]